I have been a bit slack in keeping up with this blog. So here goes…. Lisbon.

Lisbon is an amazing place with so much to see. I stayed there for 12 nights and managed to have a couple of days rest with the knowledge that I wasn’t seeing everything there was to see. But that’s ok. After almost 7 months of travelling with very few days of rest I desperately needed a break. After travelling around Spain with not much opportunity to talk to others once I left Barcelona, I realised how lonely I was feeling. In Lisbon I was so lucky as my friends from Sydney were there for 3 days while I was and we hung out which was so nice. And then the last night a couple of friends from my home town arrived so I ended up having dinner with them. It’s so amazing to have these types of opportunities when being 16000 kilometres from home!

Lisbon has only become a popular tourist attraction in the last few years and they have worked hard to manage the influx of tourists which, from my perspective, they have basically achieved. It has so much going for it on so many levels. Lisbon reminded me of San Fransisco as it had some very steep streets near the ocean. I was a little out of the main city however it was easy to negotiate public transport in and out of the centre. I also did a lot of walking… especially up hills and stairs!

The street art was great. There is an artist, Bordal ii, who uses recycled materials for his street art and is becoming very well known in Lisbon and even commissioned. The government commissions a lot of street art which is pretty cool. I did a lot of walking to explore this amazing city and it’s street art and was rewarded with more than I expected.

The architecture in Lisbon is amazing. From the ancient to the modern. Even the main train station, Gare do Oriente, which was built in 1994 is a wonderful example of architecture. Although I was basically over churches after being in Spain and seeing so much opulence (except Sagrada Familia – still one of my top 3 sights), I did visit a few in Lisbon. The cathedrals and churches in Lisbon were understated compared to Spain’s with very little over the top opulence. My favourite was the Igreja do Carmo church, built in the late 1300’s which was partially destroyed during the earthquake of 1755. The story is that they never repaired it to remind them of the devastation it caused as many were killed when it collapsed. However, it is so beautiful in its disrepair. 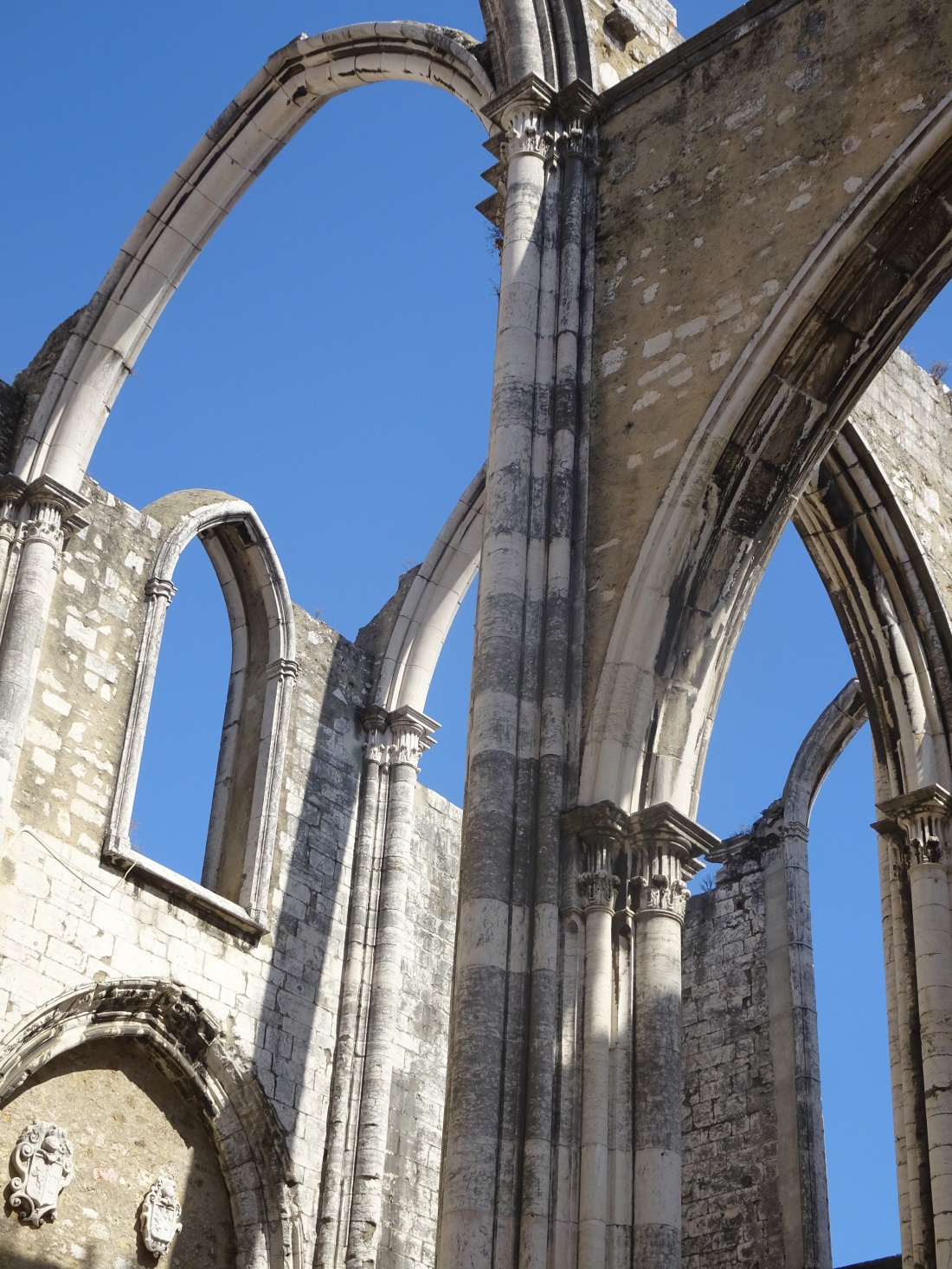 If you are in Lisbon, you definitely have to of visit Sintra and Cascais which are both a train ride away. I initially booked a day tour to Sintra and Cascais. I don’t normally do tours, however, I was a bit anxious about doing these trips on my own for some reason. As it was, the universe decided to show me my own capabilities and the tour was cancelled so I took the train the Cascais one day and took my time looking around, and caught the train another day to Sintra. Sintra was amazing. I managed to get the bus up to Pena Palace without too much of a wait (sometimes you can wait for hours!) as I got there early. Although I only purchased a ticket for the outside areas, it was amazing. The line for inside was so so long that I was grateful I hadn’t purchased one. I decided to walk down the hill to the castle (the right decision again as the direction the bus would have taken was bumper to bumper for kilometres). I loved both the palace and the castle which are both nestled in the forest covered mountains. It was a lot easier than I thought it would be and a lot more enjoyable taking my time doing what I wanted when I wanted.

Lisbon, for me, gave me some refuge from the intensity of my travels. I was staying in a separate part of a lovely apartment in the suburbs with a lovely family who provided me with wine, cheese and crackers on my first night and soup and bread during my stay, so I felt looked after, which I sorely needed. I had the companionship and love of my friends while I was there after not really having any genuine contact with people who care about me since Barcelona which was wonderful. I had enough time to recuperate some of my energy and passion for my journey. It was an easy place to navigate either walking or on public transport and I felt totally safe even at night on my own. Lisbon is beautiful and definitely well worth the visit.

View all posts by Moz Mc

2 thoughts on “Lisbon – fairy castles and all things nice.”