We got a taxi down to Kathmandu from the monastery and after I found a room I hung out with my new beautiful friend and her son. After a few beers we headed out to eat with some other friends we had met at the monastery. I don’t really think I drank a lot but suffered a hangover the next morning. Maybe a couple of months of not drinking impacted more than I realised! Anyway it was a great night and very interesting catching up with these guys in the ‘outside’ world even if I did break the fifth rule of Buddhism (that didn’t take long… although I have a confession to make. I had a beer with two crazy boys next door to the monastery just before leaving… I’m sure it doesn’t count though!) 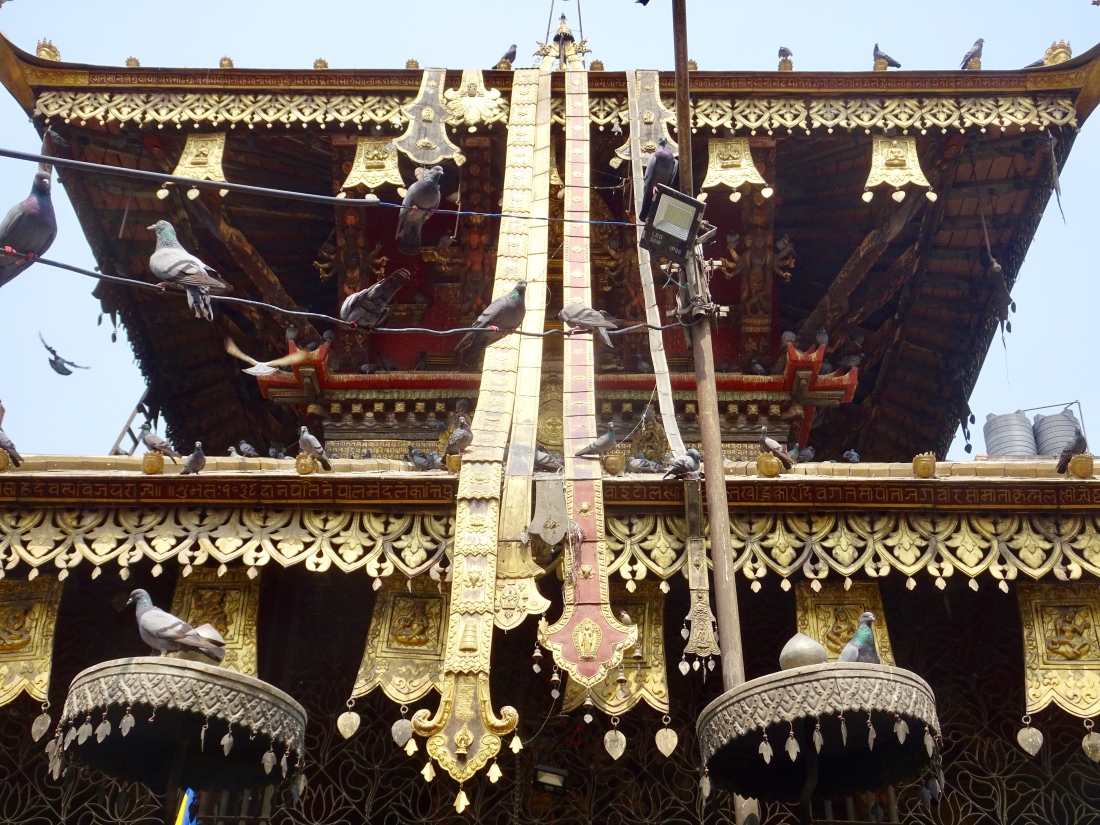 My friends were heading in different directions the next day so I was on my own again. I wandered around the streets of Kathmandu and met an Indian guy who became my best friend and adopted son and showed me some temples. He told me that his wife and children lived near Delhi. He is 25 years old and his oldest child is 10 which means that he was 15 when he was born! His wife is 40 years old and was the wife of his brother who died so he needed to step up to the plate. I asked him how he felt about that and he said that he wasn’t happy at the time, however his wife and him understand each other now and he can’t do anything to change it anyway so he just accepts it. It’s not a bad attitude to have. Of course he had an agenda spending time with me. In Varanasi it was silk scarfs. In Kathmandu it is Buddhist paintings. He wanted to take me to his art school where I could buy a painting. I was very clear that I wouldn’t be buying anything however the hopeful remain hopeful until the end. I don’t think he could believe that I could resist the sales pitch when we got there. After almost 3 months of travelling I have become very proficient in saying ‘no thank you’ and not feeling any guilt! I did enjoy his company though and to hear his story and see photos of his wife and children.

Afterwards I was alone again and I felt it. It was weird being on my own as even though I’m travelling alone I have managed to have company a lot of the time especially in the monastery. I decided that I needed to change hotels as the one I was in was expensive (relative to India) but more so the room smelt of mould. So I ended up looking at a number of hotels in the vicinity and decided on one which was cheaper and had a nicer room. I ran into one of the crazy boys who had some problems getting out of the country – apparently they wouldn’t let him on the plane because there was a bite out of one of his passport pages! (A drunk friend bit it some time ago but it was never a problem before). We ended up having dinner together which was pretty cool. The next day I traipsed around the major tourist attractions with a young, beautiful American/Puerto Rico friend who I also met at the monastery. We hired a taxi driver for half the day and he took us around to the 3 major tourist sites and told us a bit about his life. He was an amazing man who had 4 children and 3 of them were at university, one in Sydney and one in Japan (I’m not sure about the others). He had worked for many years without a holiday to ensure that his children had a good education and could make a go of it in life. He is going to take his first holiday in 30 years and visit his daughter in Sydney in December. I was really excited for him.

The next couple of days I spent on my own but it was great. I did some more wandering and I thought a scooter would be a good idea so I can head farther afield. There was no clear advertising so I asked at travel agents/adventure tour places and this guy around the corner from my hotel said I could have his scooter for the day for free! I was a bit suspicious as I’ve always believed that you don’t get something for nothing but apparently I’m wrong. I collected the scooter and parked it in the hotel basement garage which had an incredibly steep driveway. Next morning I was ready to rock and roll. After getting help to start it as the battery was flat I attempted to ride up the driveway at full throttle however the scooter could not make it to the top! So there I was with the brakes on hard, with no way of getting up to the top. I had no option but to start screaming ‘help!’ and about 10 Nepalese men came running – I’m pretty sure that they thought I was being attacked – and pushed the scooter up the rest of the way. I was pretty shaken to be honest however once I settled down I thought it was incredibly funny and I rode off laughing while also being thankful that it didn’t end badly! Nepalese roads are definitely more chaotic and difficult to manage than Australian roads, however, I still don’t think that they are as bad as India. The Nepalese stop at lights and even sometimes stop at crossings which is unheard of in India! Negotiating very busy cross intersections is interesting as basically you just go when there is a small gap otherwise you would never get through. I think I mastered it pretty much.

I made it to both my destinations with no incidents – except for a rather large protest march in Patan Durbar Square as I was trying to leave which caused a major traffic jam and a huge storm with heavy rain in Bhaktapur Durbar Square – however I enjoyed the ride and managed not to end up under a truck! At Bhaktapur Durbar Square I agreed to have a guide as I liked the guy who approached me and it just felt right. It cost me $5 USD. Other than the history of the buildings (which sadly, I’m not that interested in unless it relates to now) he told me a lot about the damage done during the 2015 earthquake (which interested me much more) including the impact on his family. His uncle died in the quake and his second child had just been bought home from hospital after his birth and was being oiled when the quake hit. He was out and ran back to find his family trembling and crying under a bridge-like structure. It was a very frightening time for him and his family and they still haven’t been able to repair their home as the government gave very little (enough rupees to buy about 7 bags of cement) and they don’t have the money to do it themselves. He showed me where his room had been which was now unliveable. Regardless, he works at 3 jobs and sends his boys to school, which is expensive, to ensure that they have an education. I am amazed at how determined these people are to ensure that their children have a better standard of living than they have had. I loved hanging out with him and hearing his story.

As it was raining and I had no wet weather gear, my tour guide, and now friend, arranged to have a rain coat type of garment made up for me out of a roll of plastic. I looked like I was wearing a big see through garbage bag and it amused many on the road all the way back to Kathmandu. It made me laugh to see other people’s reactions to this white woman on a scooter in a plastic bag! It definitely gave them a laugh! On the ride back I ‘met’ lovely Nepalese people. On one bike, there was a mum and dad and young child of about 2 who responded to me waving at her by waving back and blowing kisses. It was very cute. When I asked another guy on a bike when we had stopped where Thamel was he led me home. I am amazed at how friendly and helpful Nepalese people are.

The next morning I got ready to leave Kathmandu for Nagarkot which is a quiet place in the mountains. My friend and her son from the monastery are meeting me there before they return home. I feel very lucky. I have once again, on this journey, experienced the company and the generosity of people, both tourists and locals. I continue to want to pinch myself to see that this is real as I am so amazed that I am travelling to these wonderful places. I am so grateful for everyone that I have met while in Nepal so far and I know some of those friendships will continue for years to come. I am becoming more confident in my travels and am enjoying every moment. My life is absofuckinglutely amazing and I feel very blessed.

View all posts by Moz Mc

One thought on “‘Kathmandu, I think that’s where I’m really going to’”